The species of wallabies that are brought to kangaroo house are generally the following:

The Agile Wallaby, as its alternative name implies, is a sandy colour becoming paler below. It is a sociable animal and grazes on grasses and other plants.

There are four subspecies of the Agile Wallaby:

The Black-striped Wallaby resembles the mainland race of the Red-necked Wallaby, differing in the black line down its back, a white stripe over the hip and more red colouration (extending down the arms and further down the abdomen). It is shy, nocturnal grazer and is not well-known owing to its preference for thick scrub, where it may easily be hidden. 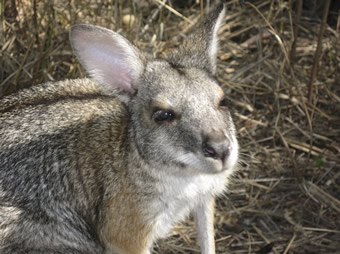